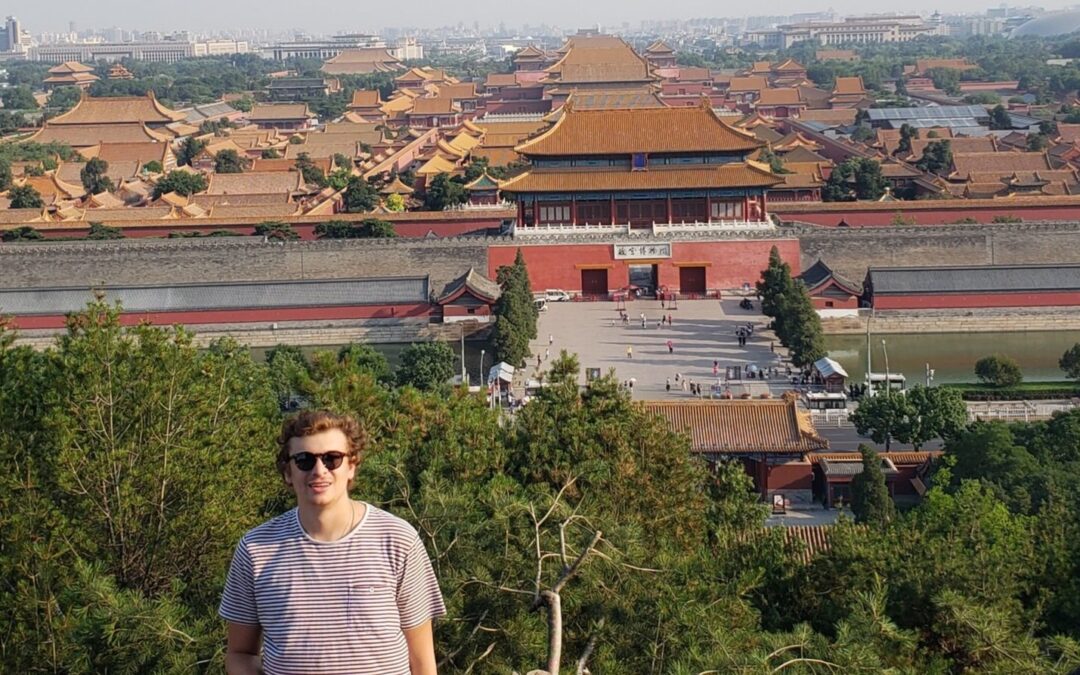 Meet Tate, a Santa Rosa JC transfer and UC Berkeley graduate who studied abroad in London as a community college student and later in Beijing while at Berkeley. We wanted to ask Tate a few questions about his study abroad experience and were especially interested to hear about his time at Tsinghua University, as he applied to the program there independently.

Why did you decide to study in China, and how did you find out about the program?

When I was in junior college, I studied abroad in London. It was my first taste of what it is like to live and study overseas. Since that experience, I knew I would do it again somewhere down the line. After two years at Santa Rosa, I transferred to Berkeley and majored in Political Science. Berkeley was amazing and, when I got there, I experienced academia on an entirely new level. I was learning an incredible amount and was being pushed more than I ever had before. However, something was still missing.

I was missing the experiences I had while in London. As amazing as Berkeley is and was, my time abroad had shown me that there is much more out there than just the university bubble. As a dyslexic and a CC student, I learn by doing. I realized that for me to get the most out of my educational experience, I had to study abroad again and go somewhere outside of my comfort zone that would challenge me.

As a Political Science major, many of my lectures seemed to point heavily in Asia’s direction. I became interested in the political and economic changes taking place in the region. After some thinking, I decided that I wanted to find a way to study abroad in Asia. Still, given that I was a transfer student with only two years to spend at my four-year institution, I thought I would need to extend my senior year somehow. My choices came down to Beijing or Bangkok, but I ultimately decided that I would get a more well-rounded experience in China.

I spent the summer before my senior year working and emailing people in Beijing who could help me figure out if it was possible to independently apply to a university there. I eventually found the non-degree program at Tsinghua University. It allowed me to apply independently, which meant that I could pay Chinese tuition instead of the Berkeley study abroad tuition. Canceling my last semester at Berkeley was a tough decision, but the opportunity to study abroad again was too great to pass up.

What was the study abroad experience like? What advice would you give to a student who has never studied abroad but wants to?

The study abroad experience was amazing. The scariest moment was the first plane ride to Hong Kong. All I had was my one-way ticket, visa, and acceptance letter—thankfully everything worked out!

Studying abroad showed me how important it is to push barriers and put yourself in situations that will help you succeed. I have been wanting to put my study abroad experience down on paper for a while now because, for me, it shows that anything is possible. I was able to go to China and live without any prior experience or knowledge of the country, and I could fund the experience myself. It goes to show that there are ways to get past the hurdles in your way no matter who you are.

The main point that I would want to get across is that if you’re a student who wants to study abroad, you don’t necessarily have to go through the academic programs associated with your university or community college. There are lots of opportunities out there that you can put together yourself by applying directly to institutions. I met many European students in China who had applied independently but didn’t meet any other Americans who had taken that route. I think it’s important to get the word out that this is a great way to go about studying abroad no matter where you are in your academic journey.

At first, I was a little worried because I had zero experience with Mandarin, but my program was in English and all of my social science classes flowed pretty well. The classroom experience was completely different from what I had experienced in the United States. All of my professors were extremely knowledgeable and my peers were diverse and experienced in their fields. Every classroom had a camera in the back of the room and there were listening devices there as well. It was a very dynamic experience. I was also able to learn about other international scholarships, such as the Schwarzman Scholarship, during my time there. This, and the many experiences of a different society, open the mind to the countless ways of living.

What advice would you give to other students?

Studying abroad unlocks so many opportunities that we don’t realize. My entire perspective changed after living in China, and I was able to learn a lot about what I wanted and how I would continue forward. I just finished my Fulbright application for Taiwan, and I don’t know if I would be doing that had it not been for studying in Beijing. I realized that I wanted to continue having experiences like that, which is why I extended my hiatus from Berkeley to work in D.C. for then-Senator Kamala Harris and only just finished my degree at Berkeley last summer. It may not have been the usual route through school, but the point is the experiences we have. The odds are not always in our favor, but it is important to empower students, especially community college students, to be creative and branch out from our comfort zones. As community college students, we are used to the unconventional route in education. Instead of shying away once you transfer, you should continue to embrace the unconventional, creative, and innovative ways of attaining education as it leads to a more holistic and interesting academic experience—and ultimately, a unique life narrative.